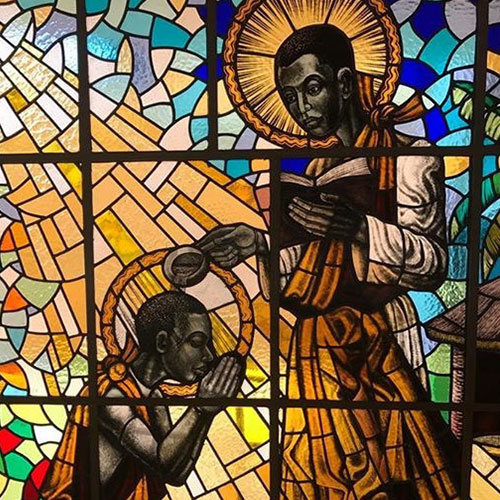 Charles Lwanga and other Christians in Uganda were martyred between November 15, 1885 and January 27, 1887. When the White Fathers (a Catholic missionary community) arrived in Uganda, they were received peacefully by King Mutesa. The priests evangelized the people, and several of the young pages in the king’s court became Catholics. When the king’s son, King Mwanga, became king, the atmosphere changed. King Mwanga was corrupt and immoral and ritually engaged in pedophiliac practices with the younger pages. King Mwanga was opposed to outside influences and had the prospective Anglican Bishop murdered. Joseph Mukasa, the king’s chief page, who had tried to protect the younger pages from the king, denounced this murder and was beheaded on November 15, 1885. Charles Lwanga then became the chief page, and also protected the boys from the king. When Joseph Mukasa was killed, Charles and other pages realized that their lives were in danger. They went to the White Fathers and asked for Baptism. The following May, the king learned that one of the pages was taking Catechism lessons. The king separated the Christians from the other pages and asked the Christians if they were willing to keep their faith. “Until death!” they answered. The Christian pages were bound together and walked to Namugongo, two days away, where they were to be burned at the stake.  There they were kept tied together while the wood for the fire was prepared. On June 3, 1886, Charles Lwanga was separated from the other pages and burned at the stake. His last words were, “Katonda!” (“My God!”). His companions were then burned together the same day, praying and singing hymns until they died. The last martyr, a young man named John Mary, was beheaded by King Mwanga on January 27, 1887. During the reign of King Mwanga, about one hundred Christians, both Catholic and Protestant, were tortured and killed. When Pope Paul VI canonized Charles Lwanga and his companions, he also made reference to the Anglican pages martyred for the same reasons. In later years, King Mwanga warred against British and other foreign influences in Africa. Eventually, he was captured and exiled to the Seychelles, a group of islands east of mainland Africa. While in exile, he was received into the Anglican Church and was baptized, taking the name Danieri (Daniel). He died in the Seychelles in 1903. Some years later, his remains were taken back to Africa and buried in the Tomb of Kings,  Kasubi, Kampala, Uganda. Saint Charles Lwanga is the patron saint of African Catholic Youth Action, converts to the Church, and victims of torture.

This website uses cookies to improve your experience while you navigate through the website. Out of these, the cookies that are categorized as necessary are stored on your browser as they are essential for the working of basic functionalities of the website. We also use third-party cookies that help us analyze and understand how you use this website. These cookies will be stored in your browser only with your consent. You also have the option to opt-out of these cookies. But opting out of some of these cookies may affect your browsing experience.
Necessary Always Enabled
Necessary cookies are absolutely essential for the website to function properly. This category only includes cookies that ensures basic functionalities and security features of the website. These cookies do not store any personal information.
Non-necessary
Any cookies that may not be particularly necessary for the website to function and is used specifically to collect user personal data via analytics, ads, other embedded contents are termed as non-necessary cookies. It is mandatory to procure user consent prior to running these cookies on your website.
SAVE & ACCEPT